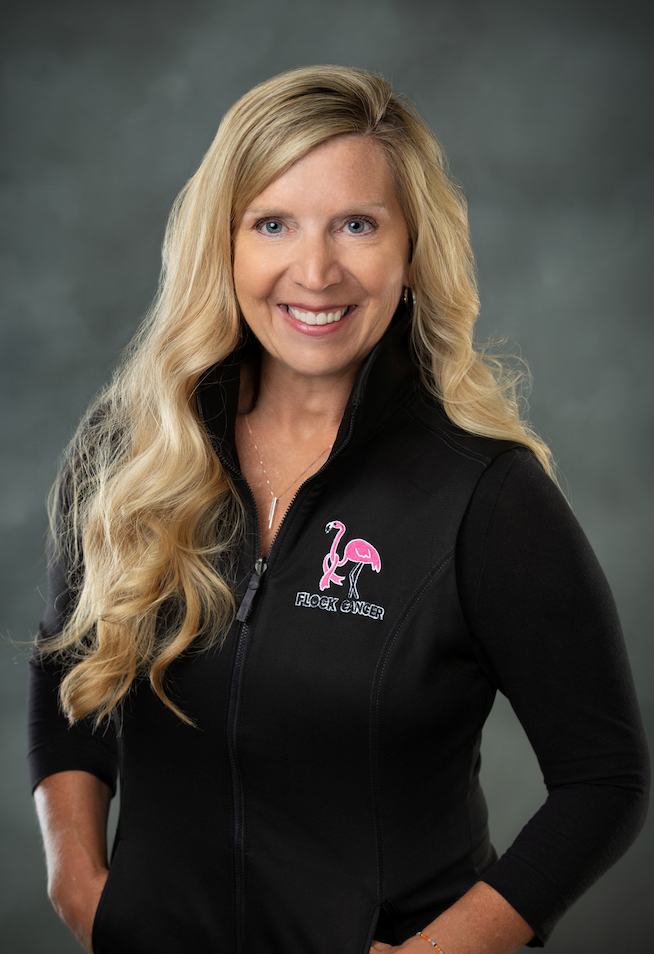 In March of 2021, as the COVID-19 pandemic took hold, Leslie Scantling found herself yearning for connection more than ever before. She was beginning to emerge from a whirlwind series of life-altering events and personal losses that had taken place during the previous three years—including a battle with breast cancer, numerous surgeries, the death of her father, the end of her marriage, and her children leaving home to attend college.

“I was alone for the first time in my life, and much more alone than I’d ever imagined.  I had so many gaping holes in my life and needed a lifeline.”

The sense of loss Leslie felt became deeper with the pandemic-related cancellation of the local Susan G. Komen Race for the Cure in 2020. Leslie and her mother— herself a breast cancer survivor of 20 years—made an annual tradition of participating in the event and hosting a celebration the night before. “We called it our Pink Party,” Leslie smiles. “And, because we’re silly, the theme became flamingos. We decorated the entire front yard with pink plastic flamingos every year.” When the race was canceled for a second time in 2021, Leslie looked for a way to keep the tradition alive—and found the lifeline she needed. Driven by her desire to give back, Leslie decided to organize a small walk for close friends and family members. She shared plans for the event on social media and was stunned by the overwhelming response from the Boise community. “People started knocking on my door— survivor groups wanting to participate, neighborhood associations asking how they could support us, reporters wanting to tell the story,” she says.

When it was time to give the event a name, Leslie had to look no further than the flamingos in her own front yard. “Flock Cancer became the name of the walk,” she laughs. “It seemed like a natural fit!” What began as a small event ultimately grew to include approximately 400 survivors and supporters, garnered national media attention, and raised more than $25,000 for the Oncology Recovery Program offered by the local YMCA in its first year. Leslie especially found joy in the chance to support a community resource that played a critical role in her own cancer recovery. “I was broken, and the program helped me put the pieces back together,” she says. “My goal is to endow the program, so it’s available to every cancer fighter and survivor at no cost.”

For Leslie, organizing the Flock Cancer walk—and championing her fellow survivors—was another step in an ongoing journey.

“It’s important to take the experience back, to say ‘I give myself permission to acknowledge my journey, I did something hard, and I want to give it space and honor that. Survivorship is complicated and messy. Nobody knows the emotional toll. Some people think once you’re up and walking, you’re done,
it’s over. Your incisions might be closed, but you’re not healed. Survivorship is the longest part of the disease, and fellow survivors need that connection with others who understand it.”

In that first year, Flock Cancer Idaho was created and became a 501c3 organization. The mission for Flock Cancer is to fill the community void left by Komen and provide an event for survivors and families to come together to raise awareness and funds to benefit local breast cancer fighters, survivors, families, and programs. In the first two years, the organization raised close to $100k. With NO paid staff, all money raised after the event goes directly to Treasure Valley programs to benefit breast cancer efforts.
Providing a source of meaningful connection helped Leslie reclaim her personal value following the most difficult experiences of her life. And, in her ability to find joy through giving back, she refuses to let tragedy or grief define her. “I spent a long time defining myself by others’ views of my worth, and I’ll never do it again,” she says. “I remember once seeing a wall sign that said, ‘Be the hero of your own story.’ It sounded so trite, but then I found myself at a point where I’d suffered so much loss, I didn’t know my own value. I was given the opportunity to provide this event to others. I saw what I could give, what I still had in me, and it was so good to recognize that. I didn’t set out to MAKE something, but the way it happened so organically was beautiful. Making anything is brave. Not ‘fighting’ brave, but the kind of brave that looks at a horrible situation and doesn’t crumble. Making anything assumes there is a world worth making it for and it is a hopeful thing to do. And being hopeful in a world of pain is the kind of BRAVE I am happy to be associated with.”
Your Content Goes Here